Many countries with mangrove coasts give industries, such as shrimp aquaculture, a free hand in the mangroves. The mangrove destruction caused in Indonesia was followed by massive land loss, already affecting 30 million people and causing a multi-billion-dollar loss each year. Steep concrete seawalls, built to replace the mangrove greenbelts, were mined by waves in the muddy coasts. Such coasts need soft permeable structures as still used in the Frisian sea. Locally, the land loss is aggravated by excessive ground-water use resulting in sinking land that is much larger than rising seas. 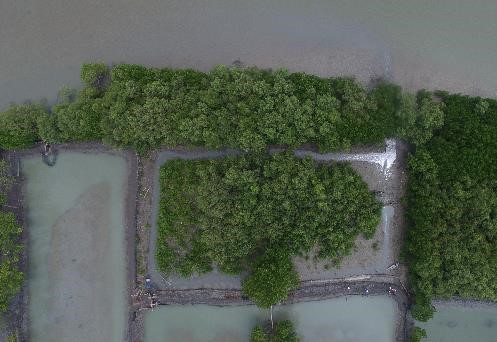 Building with Nature Indonesia (BwNI) tested an integrated approach to tackle that threat. BwNI engaged local enterprises and 10 villages of Demak district in building permeable structures that are presently maintained by communities on account of the village budget. After 4-5 years, pioneer mangroves are growing on the new mudflats (see photos, also below).

BwNI invited me to develop actions that would improve income of milkfish-shrimp farmers because one cause of mangrove destruction is their need for money. Due to their lack of training, Indonesian farmers used to manage ponds poorly, and thus, had low yields. Moreover, in Demak most farmers stopped stocking shrimp due to water pollution by (bio)industry. I proposed to use aquaculture field schools (AFS), and introduce associated-mangrove-aquaculture (AMA). These AMAs, in contrast to other mixed systems (e.g., with trees on pond dikes as promoted by many NGO’s), can have almost all ecosystem functions of mangrove. 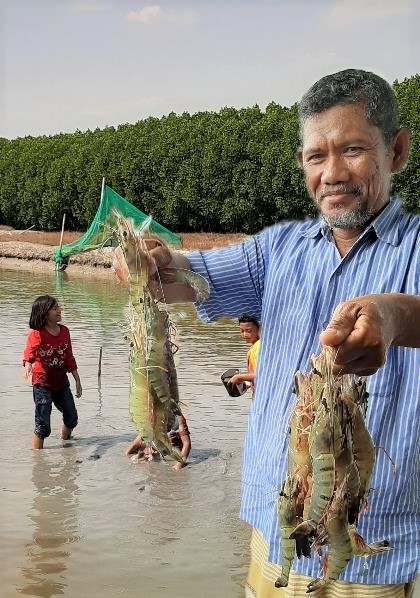 After 16 AFS sessions during 4 months, over 80% of the 277 trained men and women adopted Low External Input Sustainable Aquaculture, and managed the pond bottom and water with liquid compost and manure. These farmers doubled their gross margins, while the farmers stocking shrimp had much better margins. In later years, these well-trained farmers innovated further by integrating seaweed, mussels or cockles, and by using nursery ponds and some feed. Because we showed that yields from smaller ponds are higher, over 100 farmers didn’t hesitate to make an AMA using a ‘bio-right’ subvention. Farmers who had built AMAs maintained their income despite severe flooding. Moreover, their catch from fishing increased.

The rate-of-return of the investment in the AFS (about 1,100 USD/farmer) was more than 1.2; thus, cost was recovered within one year. Few development projects reach such rates. Our cost-benefit analysis showed that by doing mangrove recovery, simultaneously with aquaculture field schools, will deliver returns higher than the sum of the individual actions.

The last ten years before my pension, after a career in livestock R&D, I got involved in mangrove forest recovery. You can imagine that I had a good start of my gradual retirement. If you are interested to learn more: please use the links below.

- - -
Photos below: Severe flooding of the area; Pioneer mangroves are growing on the new mudflats: top and side view in 2019 and 2021.